The Five Wisdoms of Tibet, Part 6

A live online conversation with Khenchen Tsultrim Nyima of the Kagyu school of Tibetan Buddhism and co-hosts Geshe Tenzin Wangyal and Jhama Lhamo. Conversation is in Tibetan language only.

The major Buddhist traditions of Tibet have distinctly different teachings and rituals, yet they also share many commonalities, among them the jewel-like teachings of the Five Wisdoms. In Part 6 of an ongoing series of live online broadcasts, our panelists go deeper into the previous discussions — dialogs between esteemed teachers of six Buddhist traditions of Tibet — to further clarify the essence of these ancient teachings. 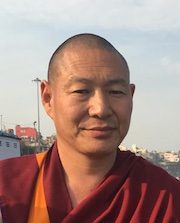