The major Buddhist traditions of Tibet have distinctly different teachings and rituals, yet they also share many commonalities, among them the jewel-like teachings of the Five Wisdoms. In Part 2 of an ongoing series of live online broadcasts, our panelists go deeper into the discussion of Part 1 — an April 30, 2022, dialog between esteemed teachers of six Buddhist traditions of Tibet — to further clarify the essence of these ancient teachings. 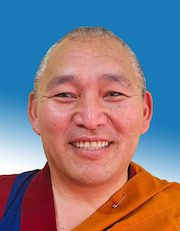 Menri Shedrup Khenpo Geshe Nyima Dhondup Rinpoche (Bön) is abbot of the Bön Dialectic School at Menri Monastery in Dolanji, India. He was born in 1978 in Delhi, India. His birth name, Tsering Dhondup, was bestowed on him by Tsondue Rinpoche, one of the greatest Bön masters of the 20th century. After completing more than 15 years’ study of Bön sutra, tantra, dzogchen and the five major and minor sciences of the Bön tradition, Nyima Rinpoche received his geshe Degree in the spring of 2006. In 2008 Rinpoche was enthroned as Menri Shedrup Lopon, the principal master of the Bön Dialectic School at Menri Monastery, where he has been teaching for more than 15 years. In February 2012 he was enthroned as the Menri Shedrup Khenpo, the Abbot of the Bön Dialectic School. Rinpoche has served as invited speaker for several major Bön and Buddhist conferences. He is author of three books covering the main philosophical teachings of Bön, and has contributed several articles to Bon-sGo, the journal of Menri Monastery in India; and the Himalayan Bön website in Tibet. He has taken on additional responsibilities as General Secretary of the Governing Council of Menri Monastery, and since 2011, as director of Menri’s official website, www.theyungdrungbon.com. In 2014 he visited Tibet and blessed many Bon followers and practitioners.
About Bön and its lineage | About Menri Monastery