Prayers for the Sick, the Dying and the Dead

As losses mount during the global pandemic, spiritual leaders of the Tibetan Bön tradition offered their prayers and blessings for those who are sick or have died. In a live Internet broadcast from India, Nepal, and the United States, thousands of butter lamps were lit and countless prayers recited. In Tibetan language with limited translation to English and multiple other languages.

English audio translation | Access other translations
While listening to a translation, it’s recommended that you view the recorded broadcast with its sound turned down or muted.

Participating in the online event were:

His Holiness Lungtok Dawa Dhargyal Rinpoche, the 34th Menri Trizin and spiritual leader of the Bon tradition, from his seat at Menri Monastery in Northern India; and monks of Menri.

You are welcome to join the lamas in reciting from the texts.

The session begins with an introduction by Rob Patzig, president of Ligmincha International.

Tenzin Wangyal Rinpoche and his family light candles. Rinpoche and his wife, Khandro Tsering Wangmo, sing the Bardo Prayer and recite the MA TRI mantra, dedicating them to the thousands of people worldwide who have died from the coronavirus COVID-19 outbreak.
Bardo Prayer by Geshe Tenzin Wangyal Rinpoche
The Precious Garland: The Prayer of the Intermediate State
MA TRI mantra 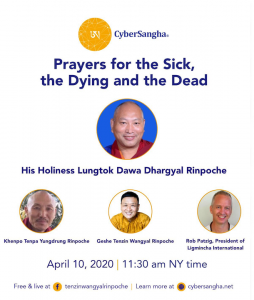