Contemplative Movement: A Bridge to Transformation

Contemplative movement can include a number of practices such as yoga, dance, tai chi, tsa lung trul khor and yantra yoga. In their own unique ways, these practices integrate self-awareness, rhythm, sound, movement, conscious breath, disciplined form, or free flowing choreography. Pulled into a harmony, or potent melody, the effects may include release of tensions and blockages in body and mind.

This Science & Spirituality panel discussion delves into the inner workings of contemplative dance and somatic healing practices. Adriana is intimately prepared to communicate her understanding of body as mandala. Peter’s life studies, practice, and research suggest that the sciences also are discovering the bridges between higher mind and body.

View on the Facebook page of Tenzin Wangyal Rinpoche to join the chat, or view here on this page.

This CyberSangha broadcast is part of “A Year of Body, Speech, and Mind,” a free 2021 online program of live teachings, practices, and science & spirituality dialogs. Learn more

Adriana Dal Borgo found her spiritual teacher after earning a degree in psychology specializing in psychotherapy. From Master Chögyal Namkhai Norbu’s dzogchen teachings she studied the Vajra Dance and later the Khaita Joyful Dances, both of which integrate meditation and movement. Appointed by her master to teach, she has shared the Vajra Dance and has coordinated related activities in centers of the International Dzogchen Community.

For many years, Adriana has coordinated the Khaita Joyful Dances and trained new teachers in this field of study. She has overseen several publications and audio and video recordings that go more deeply into the different aspects of these dances.  Collaborating with Museum of Asian Art and Culture (MACO) in Arcidosso, Italy, Adriana has curated the section on Vajra Dance and Khaita Joyful Dances. Adriana has led many courses and trained new teachers around the world, helping students to discover the joy and profoundness of the Dance. She currently directs Khaita Dance courses and events, with performances and workshops in various countries.

Peter Payne began a lifelong study and practice of somatics early in life. Born in London, Peter grew up in Switzerland, London, and the United States. After beginning Judo training at age 11, his interest in the martial arts grew to include karate, aikido, taijiquan, and most recently xingyiquan. At Harvard, Peter’s interest in physics and psychology led him to the human potential movement in its early days.

After college Peter began a lifelong study and practice of somatics. In the late ’60s he studied yoga with Rammurti Mishra, lived at one of R.D. Laing’s experimental communities, and learned massage and several forms of bodywork. He is qualified as a teacher of the Alexander Technique of postural re-education and is certified as a practitioner of Somatic Experiencing®, a form of trauma therapy. At Dartmouth College, New Hampshire, Peter conducted research into somatic practices and later published the results of several clinical trials and theoretical papers on the neuroscience behind somatic practices. See Peter’s recommended reading 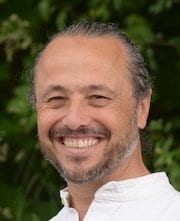