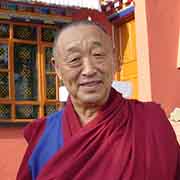 The Bön community throughout the world was saddened by the death on September 14, 2017, of His Holiness the 33rd Menri Trizin, Lungtok Tenpai Nyima Rinpoche. His Holiness was the worldwide spiritual leader of the Tibetan Bön tradition and abbot of Menri Monastery in Dolanji, India. Bönpos throughout the world were asked to offer candles, incense and prayers for His Holiness. Ligmincha International sangha members gathered to practice in groups at or near the time of the cremation ceremony, which was scheduled to begin at 5:30 a.m. on Monday, October 2, India time, equating to Sunday, October 1, at 8 p.m. New York time.

A living embodiment of wisdom and compassion, His Holiness is considered to be an emanation of Nyame Sherab Gyaltsen, who in 1405 founded the original Menri Monastery in Tsang Province in central Tibet. Born in Tibet in the eastern province of Amdo in 1929, His Holiness left Tibet for Nepal in 1959. He worked to preserve Bön texts, taught in England and Norway and, at the request of His Holiness the 14th Dalai Lama, founded a school for Tibetan refugee boys in Northern India. He was selected to be the 33rd Menri Trizin—the abbot of Menri Monastery in Dolanji and spiritual leader of Bön—in 1968. Throughout his life, he worked tirelessly to support practitioners and ensure that the teachings of Bön would continue.