Music From the Heart, Session 1

Music from the Heart: a CyberSangha Series of Online Concerts, Session 1

View recording on Facebook (70 minutes) to join the chat.

“This Is It,” a poem by Tenzin Wangyal Rinpoche, recited in Spanish; and “Madre Compasión Sherap Chamma” sung in Spanish, by Elsa Coliva 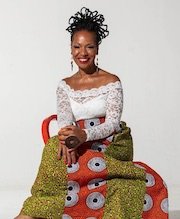 Lisa Simone was introduced to the practices of Tenzin Wangyal Rinpoche in October 2011, and graduated from the 3 Doors North America Academy in 2015. “The day I became a student of Rinpoche is the best gift I have ever given myself, for he saved my life,” she says.

Lisa is a veteran of the first Gulf War, having served in the U.S. Air Force for more than 10 years. Two years after her honorable discharge, Lisa made her theatrical debut in the touring company of Jesus Christ Superstar, starring Ted Neeley and Carl Anderson. During this tour Lisa began using one name, “Simone.” She then joined the original Broadway cast of “Rent” as a swing. At the same time, Simone originated the title role of Aida in Disney’s “Aida,” and of Nala in Disney’s “Lion King.” A year after landing on Broadway she went on the First National Tour of “Rent” in the role of Mimi Marquez, garnering nominations for both the Helen Hayes and Jefferson Awards for Best Actress.

While on hiatus from theater, Simone joined the Chicago-based acid jazz band Liquid Soul, whose album “Here’s the Deal” received a Grammy nomination.

Lisa won the National Theatre Award for Best Actress in a Musical for her performance in the title role of Aida in the Broadway show’s First National Tour, before returning to the role at Broadway’s Palace Theatre.
She performed at New York’s Carnegie Hall with Odetta, Tracy Chapman, Liz Wright, and Oscar Browne Jr. in paying homage to her mother (Dr. Nina Simone) at the first “Sing the Truth” concert, which later went on tour throughout Europe and the South Pacific.

Lisa is the founder and executive producer of “What Happened Miss Simone,” the first official documentary on the life of her mother. It received an Oscar nomination, among 17 other nominations, and won the Emmy for Outstanding Documentary in 2016.

After 20 years as Simone, she returned to using her given name, Lisa Simone. From New York’s Carnegie Hall, Town Hall, and Lincoln Center, to London’s Royal Albert Hall, the Sidney Opera House, Hollywood Bowl, The Olympia in Paris, and major jazz festivals including Montreux, Cully, Marciac, North Sea, Telluride, and Vienne, Lisa’s charismatic personality and ability to inspire others through song has captured the hearts of audiences worldwide. 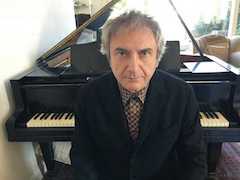 Roberto Cacciapaglia was born in Milan, Italy. He graduated with a degree in music composition from the Giuseppe Verdi Conservatory, where he also studied conducting and electronic music. Over the years he worked at the studio of Phonology of Rai and collaborated with the CNR (National Research Council) in Pisa where he studied computer applications in the field of music.

Several of his musical pieces reached Number 1 on the iTunes classical music charts. His awards include Best Live Act 2019 from American Magazine’s Bluebird Reviews. Roberto has toured worldwide through China, Turkey, Italy, Russia, and the United States (including Carnegie Hall in New York) to great acclaim. “Atlas,” his latest album released in 2016, is a collection of his greatest music that includes an instrumental version of “Starman” in tribute to David Bowie. His “Tree of Life Suite” was performed in concert with the Milan Teatro alla Scala Academy Orchestra at the Open-Air Theatre to celebrate EXPO 2015, and he has collaborated for years with the Royal Philharmonic Orchestra. He has also composed operas.

Roberto is also founder of the Educational Music Academy with the aim of giving a voice to young musical talents, composers and performers, pianists and musicians in order to give shape to their projects and to achieve professional mastery in their works. 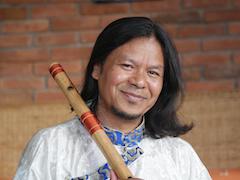 Raman Maharjan is a well-known bansuri (bamboo) flute artist from Nepal. Born in 1971, he has been performing since 2004 and is the founder and member of Rudra band, Vajra Group (a classical group of Kathmandu, Nepal), and Trikaal Band (a fusion band Kathmandu). He works as a studio musician at Do, Re, Mi Recording Studio Kathmandu, Alpha Digi Tech Kathmandu, among other studios.

Raman Maharjan won the Narayeni Sangeet Award in 1999 and the Kalanithi award in 2001 and 2003. He has performed in many countries around the world, played in many Tibetan Pop albums, and participated in documentaries and other films in Nepal. He currently lives in Kathmandu and is the founder and flute instructor of Music House Kirtipur. 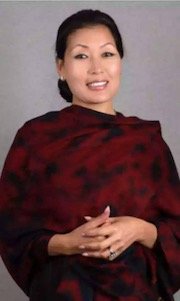 Tsering Wangmo is a master singer and dancer. A graduate of the Tibetan Institute of Performing Arts in Dharamsala, India, she is co-founder and artistic director of Chaksam-pa, a well-known Tibetan dance and opera company in California. Her vocal and dance performances worldwide include Lincoln Center in New York and the Warner Theatre in Washington, D.C. She has made numerous recordings.

She recently published Kongpo Ama Bhalu, a Tibetan song book whose lyrics she learned from her elders and which had never before been documented.

A private chef for the past 15 years, Tsering Wangmo opened “Lhasa Moon,” the first Tibetan restaurant in San Francisco in the Marina District, and has published a Lhasa Moon Cookbook. 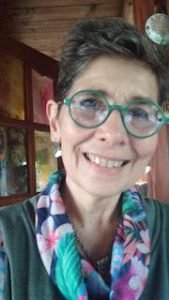 Elsa Coliva is an Argentinian music teacher who currently lives in Patagonia. She refers to her teaching class as “Partera de Voces” (Voice Midwife).

Currently the head of Ligmincha Argentina, for 40 years Elsa has been dedicated to finding the connection with the “Essence” through natural songs. In her Singing Awareness Sessions she unmasks the games of the ego that tend to limit one’s ability to sing or keep them attached to the fantasy of success.

In the past two years she has used her voice to share Tenzin Wangyal Rinpoche’s texts with the Ligmincha sangha, or community of students.

“This Is It,” a poem by Tenzin Wangyal Rinpoche: